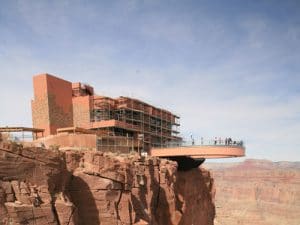 Scheduled to open on March 28, 2007, the Grand Canyon Skywalk is said to be able to withstand the weight of seventy-one fully loaded Boeing 747 airplanes (more than 70 million pounds), though only 120 people will be allowed onto the glass bridge at any given time.

This high-profile attraction is the latest attempt by the Hualapai Nation to increase visitation to their tourist enterprise known as Grand Canyon West—located within the boundaries of the 2000-member tribe’s one million acre reservation in northern Arizona.