Christa Sadler is a geologist, educator and naturalist with a serious addiction to the outdoors, rivers, deserts, mountains and chocolate. She has pursued research in archaeology, geology and paleontology across much of the globe, including searching for dinosaurs in Montana, fighting off dust storms and overly curious camels in the Gobi Desert of Mongolia, and steering clear of annoyed marine iguanas in the Galapagos Islands. Her articles and photographs have appeared in Plateau Magazine, Plateau Journal, Sojourns, Sedona Magazine, and Earth Magazine. Her books include There's This River… Grand Canyon Boatman Stories, an anthology of short stories and artwork by guides on the Colorado River (This Earth Press), and Life In Stone: Fossils Of The Colorado Plateau, about the fossil history of the region and its public lands (Grand Canyon Association). Christa newest publication, Dawn of the Dinosaurs: The Late Triassic in the American Southwest, was released in August of 2015 and is an update of the 1988 classic with all new text, new science, and new, expanded illustrations. Occasionally she makes it home to Flagstaff to sleep.

It’s been said so many times that it sounds like a cliché, but taking a hike into the Grand Canyon is literally a Walk Through Time. Nowhere else on the planet is such a great amount of Earth history … END_OF_DOCUMENT_TOKEN_TO_BE_REPLACED

The rim of the canyon is formed of a layer about 300 feet thick called the Kaibab Formation. This creamy yellow limestone has fossils in it: sharks, fish, corals, brachiopods, bryozoans, crinoids and … END_OF_DOCUMENT_TOKEN_TO_BE_REPLACED

As you finish your long traverse in the red layers of the Supai Group, you'll come to a very steep part of the trail, where switchbacks wind down through the next layer, the Redwall Limestone. It … END_OF_DOCUMENT_TOKEN_TO_BE_REPLACED

Now, when you step below the Grand Canyon Supergroup rocks, or below the Tapeats Sandstone, depending on what trail you’re hiking, you will have gone back 1.7 billion years, 1700 million years! As … END_OF_DOCUMENT_TOKEN_TO_BE_REPLACED 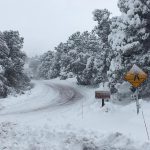 Winter has come early this year! Not only is much of the country experiencing early winter conditions, but Grand Canyon has been seriously impacted by heavy snow and freezing temperatures. Various road closures are affecting the park. State Route 67 to the North Rim has been closed and will remain so until it reopens in… [Read More]