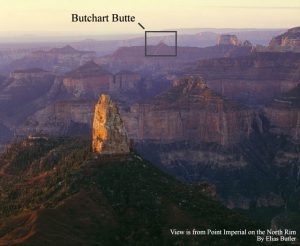 The late Harvey Butchart has made a return of sorts to the canyon he fondly referred to as his “mistress.” On July 16, the Arizona Board of Names named a 7,600-foot peak after the legendary hiker who passed away in May of 2002.

During his reign as one of Grand Canyon’s most intrepid backcountry travelers, the unassuming math professor scaled eighty-three inner canyon summits (twenty-eight for the first time in modern history), logged over ten thousand miles below the rim, and wrote a number of guide books that shared his exploits and advice with the growing ranks of Grand Canyon enthusiasts.

During a 1996 interview, Dr. Butchart shared with me that one of his favorite stretches of Grand Canyon lie beneath the North Rim in Chuar Valley; a wonderland of interconnecting drainages that now crouch beneath a sandstone-capped peak bearing his name.

For more information and photos of Butchart Butte.