Bahia de los Angeles is known as the poor man’s Galapagos because of the richness of marine life found there. Shortly after arriving at the bay and setting up in a campground, we headed to the Museo de Naturaleza y Cultura, a wonderful little museum located in town. We had visited it on a previous trip and enjoyed exhibits including skeletons of whales and other sea mammals.

We spent the afternoon cleaning and organizing our stuff. We decided to go kayaking the next day and planned on spending the night on one of the little islands. The last time we visited the bay, we saw whales and sea lions from our boats. We were hoping to do so again. To see a map of the bay, click on the thumbnail image to the right.

We were up early the following morning. After doing any paddling in Baja, you soon realize that it is very important to get an early start. Winds usually kick up by late morning or early afternoon, making paddling very difficult and nasty. While packing up, we decided not to carry a tent. After all, we were in an area that can go years without getting rain. What did we have to worry about? Boy, was I to regret my decision later!

We took off about 7:00 A.M. and headed across the bay. Our first destination was Isla la Ventana (window in Spanish). The morning was cool but calm, and paddling was enjoyable. We crossed the bay, paddled between Islas Pata (foot) and Bota (boot), and then headed north towards Isla Calavera (skull in Spanish). Calavera derives its name from the white color given it by the cormorants that roost there, and it held one of the main attractions for us-a colony of California sea lions. You could hear them barking and watch them as they swam and lazed around on their island. We were able to paddle rather close to the island and observe them; they didn’t seem very concerned with us at all! From here we could see Isla Piojo (louse), home of a permanent colony of pelicans. 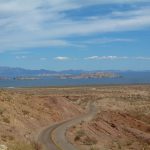 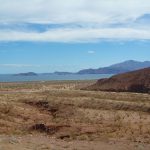 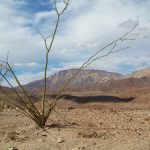 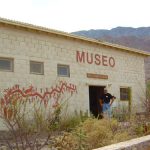 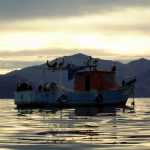 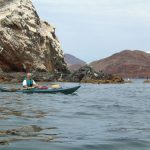 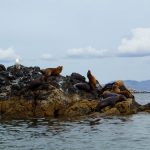 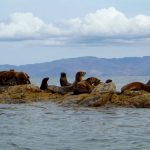 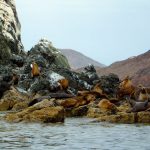 The winds were starting to kick up by then and clouds were darkening the sky. We decided to head back to the south side of Isla Pata. Strong winds were coming out of the north and we wanted to get to a more sheltered area.We pulled up on the beach and looked for the most protected area we could find. Since it was a tiny island, our choices were quite limited. With the cloud buildup, we had toyed with the idea of heading back to the mainland, but the wind now took the decision out of our hands. We had to hunker down.

As we ate dinner, the clouds got thicker and thicker. It started to sprinkle, surprising both of us. But that was to be just the beginning. Shortly after going to bed, it started to pour. We jumped out of the sleeping bags, removed the ground cloth, and rigged a shelter over ourselves and the bedding. It wasn’t pleasant, but it kept us from getting soaked. My thoughts worried over the fact that there was a chance that we might even be stuck for another night if this windy, rainy weather kept up. We got little sleep that night!

When we finally rose in the morning, the weather had abated somewhat and we broke camp quickly, determined to get back to the mainland before the next go ’round of wet weather. On our way back, the wind kicked up and made the final stretch very difficult. I was having trouble even getting anywhere. I spent a half hour in one spot even though I was steadily paddling! Talk about frustrating. Brad is a much stronger paddler than I am and went ahead to get the truck, while I headed to shore about a mile short of our launch ramp. I was glad to get out of the boat.

I think the most disappointing thing was that we never saw any whales on this trip. Perhaps they headed to deeper water because of the storm. Back at the truck, we cleaned everything and loaded up. We were back on the road by noon. It was time to head further south and warm up!

After a hectic season of work for Brad, it was time to head back to one of our favorite places—Baja California! The combination of desert and ocean makes it a great vacation choice for us, the sailor … END_OF_DOCUMENT_TOKEN_TO_BE_REPLACED

Our first destination was Cataviña-Parque Natural Del Desierto Central and Bahia de los Angeles. Cataviña is located in the northern part of the peninsula and sits in the middle of a huge granite … END_OF_DOCUMENT_TOKEN_TO_BE_REPLACED

Bahia de los Angeles is known as the poor man's Galapagos because of the richness of marine life found there. Shortly after arriving at the bay and setting up in a campground, we headed to the Museo … END_OF_DOCUMENT_TOKEN_TO_BE_REPLACED

After camping off of a road leading into the San Francisco de la Sierra mountain range, we continued south to Guerrero Negro. The town is located on the 28th parallel, which separates the states of … END_OF_DOCUMENT_TOKEN_TO_BE_REPLACED

On a previous trip to Baja, we had taken a drive from the highway south of Santa Rosalia. You can follow a rough dirt road for 75 miles, looping back to the highway near Mulegé. We had read about it … END_OF_DOCUMENT_TOKEN_TO_BE_REPLACED

The following day, we made our way to Loreto. On a previous trip, while Brad was out in a kayak, I had discovered a fabulous campsite with a view to knock your socks off! It was located right at the … END_OF_DOCUMENT_TOKEN_TO_BE_REPLACED

After our night in town, we all headed to a lovely bay that Brad and I had discovered earlier in the spring—Agua Verde. The road in gets pretty interesting in spots; there are steep, blind corners … END_OF_DOCUMENT_TOKEN_TO_BE_REPLACED