On a previous trip to Baja, we had taken a drive from the highway south of Santa Rosalia. You can follow a rough dirt road for 75 miles, looping back to the highway near Mulegé. We had read about it in a book called Backroad Baja: Maps, Logs, Trip Information, (Trip Eight) and the area turned out to be more beautiful than we could have ever imagined. We took two days to drive it, camping that night amongst the gorgeous palo blanco and zalate trees and surrounded by incredible volcanic rock cliffs. 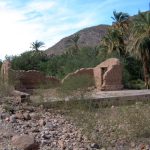 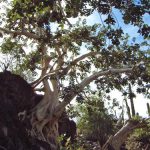 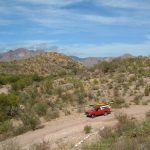 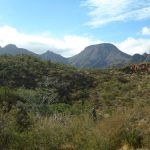 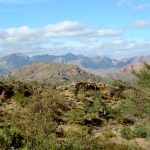 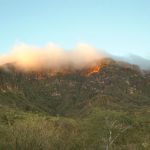 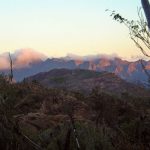 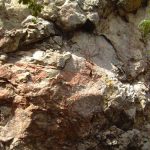 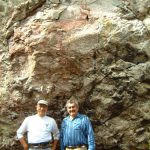 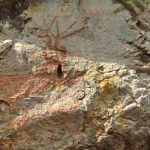 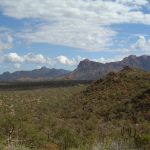 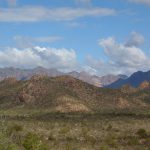 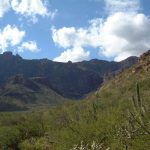 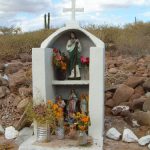 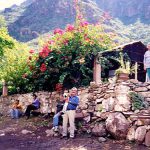 Because we had enjoyed our earlier trip so much, we decided to explore a new road in the same area. We headed up a dirt road that would take us through the village of Santa Agueda, our final destination taking us deep into the mountains. We were hoping to see some of the ancient cave paintings that we’d read about, some of which are located near the end of the road we were on.

Not much is really known about those who painted these larger-than-life figures of animals and people, but they were painted by the only culture in Baja that left behind artifacts that had nothing to do with shelter or eating. Archaeologists say they were painted about 10,000 years ago!

We headed up the road, past a village named Santa Agueda. This settlement was established by the French to supply fresh water to the copper mining operation at Santa Rosalia. The houses built by the French stand out conspicuously amongst the Mexican’s homes; they are built of wood, not the block and cement of the local population. There is no wood to build with in this desert locale, so the French had it shipped all the way from Oregon!

The road to Ranchos La Higuera and Candelaria was extremely rough and we practically crawled our way up into the mountains. The scenery was spectacular and we decided to camp early in a spot with a panoramic view. It turned out we were less than a half mile away from Rancho La Higuera. While we were setting up camp, a gentleman named Manuel came by to greet us. It turned out that all the land surrounding us was his family’s. He readily gave us permission to camp there, and we made arrangements (in very bad Spanish) to have Manuel lead us to the cave paintings the following morning.

The next morning we made our way to the ranch house, passing a friendly young man herding some goats. This was to be the beginning of a purely magical, lovely day! Immediately upon our arrival at the house, we were invited in to meet the family and have coffee and homemade tortillas served with their own goat cheese. They were to most kind and wonderful people you could ever hope to meet anywhere!

Señor Manuel led us to the cave paintings. We were fortunate to have his guidance; we would have never been able to locate these hidden treasures on our own. We were amazed at how well preserved the pictographs were, especially considering that they had been painted on a pretty exposed wall of rock. Not really a cave, but more of an overhang. Only a couple of the pictures were clear enough to know what it was without requiring much imagination. One of the photos is a rock art depiction of a deer and another was of bighorn sheep. It was incredible to think these pictographs were about 10,000 years old!

When we arrived back at the ranch house, Manuel and the family showed us around their property. Brad had expressed interest in where they got water and power, so we were shown a tank with hoses coming from two springs located nearby and the solar panel that supplied power for their limited needs. As Brad mentioned earlier, they grew many kinds of fruit and vegetables. They also raised sugar cane, cattle, chickens and goats. All in all, it was my idea of pure heaven!

It was hard to say goodbye, but we finally left and made our way south again. We spent the night in Mulegé and listened to the election non-results on Brad’s A.M. radio in our room!

After a hectic season of work for Brad, it was time to head back to one of our favorite places—Baja California! The combination of desert and ocean makes it a great vacation choice for us, the sailor … END_OF_DOCUMENT_TOKEN_TO_BE_REPLACED

Our first destination was Cataviña-Parque Natural Del Desierto Central and Bahia de los Angeles. Cataviña is located in the northern part of the peninsula and sits in the middle of a huge granite … END_OF_DOCUMENT_TOKEN_TO_BE_REPLACED

Bahia de los Angeles is known as the poor man's Galapagos because of the richness of marine life found there. Shortly after arriving at the bay and setting up in a campground, we headed to the Museo … END_OF_DOCUMENT_TOKEN_TO_BE_REPLACED

After camping off of a road leading into the San Francisco de la Sierra mountain range, we continued south to Guerrero Negro. The town is located on the 28th parallel, which separates the states of … END_OF_DOCUMENT_TOKEN_TO_BE_REPLACED

On a previous trip to Baja, we had taken a drive from the highway south of Santa Rosalia. You can follow a rough dirt road for 75 miles, looping back to the highway near Mulegé. We had read about it … END_OF_DOCUMENT_TOKEN_TO_BE_REPLACED

The following day, we made our way to Loreto. On a previous trip, while Brad was out in a kayak, I had discovered a fabulous campsite with a view to knock your socks off! It was located right at the … END_OF_DOCUMENT_TOKEN_TO_BE_REPLACED

After our night in town, we all headed to a lovely bay that Brad and I had discovered earlier in the spring—Agua Verde. The road in gets pretty interesting in spots; there are steep, blind corners … END_OF_DOCUMENT_TOKEN_TO_BE_REPLACED