The following day, we made our way to Loreto. On a previous trip, while Brad was out in a kayak, I had discovered a fabulous campsite with a view to knock your socks off! It was located right at the base of the rugged La Giganta Mountain range, and looked down on one of the loveliest views of the Sea of Cortez you could imagine. After doing some chores and re-supplying in town, we set up camp and sat back to enjoy the scenery and peacefulness.

As we were getting ready to settle in for the night, two pickups came around the hill and stopped below our camp, turning their headlights out. Feeling that they were watching us, we turned off our lantern. As soon as we did, they turned their headlights on and quickly drove their trucks up towards our camp!

How frightening this was! We were at the end of a dead end road, making it impossible to do anything but wait and wonder what was going to happen. We had never had a bad experience in Baja and began thinking things were about to change. Were we going to be attacked by banditos? Were they going to rob us? What would we do?

Those excruciating moments felt like hours while we waited for their arrival. Just before they got to us, the lead driver put a flashing yellow light on the truck’s roof.

As soon as they had us in the beam of their headlights, three men jumped out and one demanded something in Spanish. Well, our Spanish is quite limited as we attempted to explain to them. It became clear that they thought we could be poachers with weapons illegally hunting the bighorn sheep found in the area. Things quickly settled down when we explained we were just camping and certainly not in possession of weapons.

It turned out that two of the men, Juan and Leo, were basically game wardens for an area about the size of Rhode Island. They monitor the population of the bighorn sheep and enforce hunting regulations—all without the safety of weapons of their own! They were as terrified as we were approaching us not knowing if they were going to be shot. They had a very good reason to be cautious! 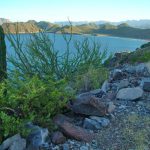 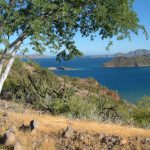 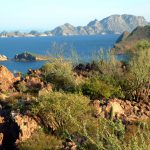 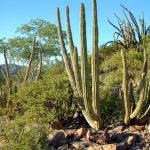 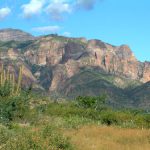 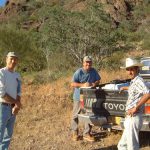 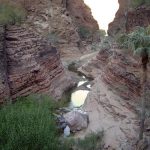 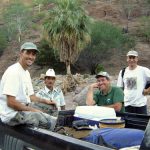 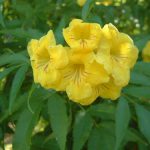 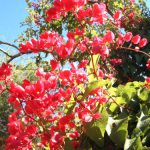 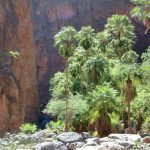 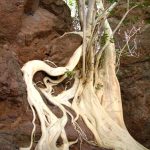 The following morning, Juan and Leo came back to make sure that we understood that everything was “cool.” We had an enjoyable visit and learned much about the wildlife in the Loreto area. We had always been curious if there was any wildlife in Baja’s mountains since we had never seen sign of any.

Not only were there bighorn sheep in these canyons, but they told us that there were also mountain lions and coyote. In fact, a nearby canyon is named El Gato (the cat). Before leaving, Juan and Leo made arrangements to go hiking up the nearby canyon, Cajon de Tecomaja, with us later that day. They were on the lookout for the borrego (bighorn sheep).

When Johnny and Leo came back for the hike, they brought a friend, Leon, who spoke English. Leon worked for the Biosphere Preserve in the Loreto area, and we enjoyed learning more about Baja. We were pleased to learn about some of the conservation measures that Mexico is undertaking to preserve some of the their natural wonders. In the canyon, we saw hoof prints of the bighorn sheep but none of the animals themselves.

The following day, Brad and I explored another side canyon named Mesquite that the men had told us about. The flowers in the canyon were incredible! Baja had had some rain just a few weeks before we arrived, and the vegetation was showing its pleasure. Everything looked fresh, lush and colorful.

After our hike, we headed into town to meet with some friends from Flagstaff, Arizona. Tom and Linda were meeting us in Loreto at Café Olé for dinner. That night we stayed in a hotel located right across from the Misión Nuestra Señora de Loreto, the oldest mission in Baja and Alta California (which is our state of California)! The mission was built in the early 1700s!

After a hectic season of work for Brad, it was time to head back to one of our favorite places—Baja California! The combination of desert and ocean makes it a great vacation choice for us, the sailor … END_OF_DOCUMENT_TOKEN_TO_BE_REPLACED

Our first destination was Cataviña-Parque Natural Del Desierto Central and Bahia de los Angeles. Cataviña is located in the northern part of the peninsula and sits in the middle of a huge granite … END_OF_DOCUMENT_TOKEN_TO_BE_REPLACED

Bahia de los Angeles is known as the poor man's Galapagos because of the richness of marine life found there. Shortly after arriving at the bay and setting up in a campground, we headed to the Museo … END_OF_DOCUMENT_TOKEN_TO_BE_REPLACED

After camping off of a road leading into the San Francisco de la Sierra mountain range, we continued south to Guerrero Negro. The town is located on the 28th parallel, which separates the states of … END_OF_DOCUMENT_TOKEN_TO_BE_REPLACED

On a previous trip to Baja, we had taken a drive from the highway south of Santa Rosalia. You can follow a rough dirt road for 75 miles, looping back to the highway near Mulegé. We had read about it … END_OF_DOCUMENT_TOKEN_TO_BE_REPLACED

The following day, we made our way to Loreto. On a previous trip, while Brad was out in a kayak, I had discovered a fabulous campsite with a view to knock your socks off! It was located right at the … END_OF_DOCUMENT_TOKEN_TO_BE_REPLACED

After our night in town, we all headed to a lovely bay that Brad and I had discovered earlier in the spring—Agua Verde. The road in gets pretty interesting in spots; there are steep, blind corners … END_OF_DOCUMENT_TOKEN_TO_BE_REPLACED