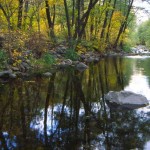 Oak Creek Canyon, although not as deeply cut as Grand Canyon, is still a very pleasant place to hike with many trails leaving the canyon floor and accessing the rim on either side of it. One will note that Oak Creek Canyon is asymmetrical in nature with its eastern side about 800 feet lower in elevation than the western side, and is composed almost entirely of basalt lava rock that rests on the Schnebly Hill Formation near the canyon’s mouth. The west side stands higher and has a thin cap of lava rock that rests on the Kaibab Limestone. An understanding of this odd arrangement reveals the geologic history of the canyon.

First, a large embayment was carved back into the edge of the Mogollon Rim shortly after it formed 30 million years ago. It was during the formation of this embayment that the upper formations in what would become the eastern walls of Oak Creek Canyon were removed. The embayment eventually became inundated with basalt lava originating in vents on top of the Rim and flowing downhill into the embayment. These flows terminated on the floor of the Verde Lake basin. Today, Interstate 17 drops off of the Mogollon Rim on the upper surface of these flows, which are dated between 6 and 8 million years old. 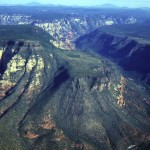 Sometime after 6 million years, the Oak Creek Fault became active and dropped the east side down about 1,000 feet relative to the west side. The fault served to direct groundwater along its trend to the south, and springs likely issued from the south facing wall of the Mogollon Rim near Uptown Sedona. Spring flow initiated a process known as sapping, whereby the spring water weakened and compromised the integrity of the rocks adjacent to the springs. With spring water concentrated both along the fault and the contact of the Schnebly Hill and Hermit Formations, the weakened rock caused the springs to headward erode back into the edge of the Rim. Through time, the process acted like a zipper being undone in the upstream direction, as this spring originating gash migrated northward along the fault line, positioning Oak Creek in the process. The sapping interpretation for the creation of Oak Creek Canyon is hypothetical at this time but can explain why the lower end of Oak Creek Canyon (Sedona to Grasshopper Point) is not positioned directly along the fault, but is exactly parallel to it upstream from Grasshopper Point. Only time will tell if the hypothesis will survive closer scrutiny.

After Oak Creek became confined within the fault zone, the deepening of the canyon ensued within the last 4 million years. This was accomplished by the relentless rolling of durable basalt boulders on the bedrock in flash floods and mega-floods associated with increased precipitation during the ice age. These boulders acted like a large rock tumbler to carve the canyon. Eventually, Oak Creek will incise down through the Redwall Limestone, the Martin Formation, the Tapeats Sandstone, and ultimately the meta-volcanic rocks that presently are only exposed near Jerome. This will certainly change the profile and look of Oak Creek Canyon and the Sedona area but outdoor enthusiasts need not fear such changes – the rate of canyon cutting, although episodic, is only about one foot every 1,600 years.

By Wayne Ranney Whether they know it or not, the 4.5 million annual visitors to Sedona come here because of the area’s spectacular geology, or to enjoy one of the many trails or cultural amenities … END_OF_DOCUMENT_TOKEN_TO_BE_REPLACED

By Wayne Ranney Before we begin to understand Sedona’s red rocks, let’s have a look at what lies beneath them, the so-called basement or foundation of the Verde Valley. These rocks are hidden from … END_OF_DOCUMENT_TOKEN_TO_BE_REPLACED

By Wayne Ranney The famous red rocks in and around Sedona are, for the most part, the same layers that make up the upper walls of the Grand Canyon. Even the formation names used between the two … END_OF_DOCUMENT_TOKEN_TO_BE_REPLACED

By Wayne Ranney Next is the Hermit Formation (formerly called Hermit Shale), which contains more amounts of mudstone than sandstone and thus weathers into a broad terrace upon which much of the … END_OF_DOCUMENT_TOKEN_TO_BE_REPLACED

By Wayne Ranney Although rocks of dinosaur age are not present in the Sedona area today, geologists believe that they were once present here. No less than 5,000 feet of this younger strata and … END_OF_DOCUMENT_TOKEN_TO_BE_REPLACED

By Wayne Ranney Beginning about 15 million years ago, volcanism returned to the Sedona area in the form of basaltic cinder cones, shield volcano’s and lava flows. Volcanism lasted until about 10 … END_OF_DOCUMENT_TOKEN_TO_BE_REPLACED

By Wayne Ranney If someone were hiking in the Sedona area 10 million years ago, they would see the Sedona red rocks partially exposed in an ancestral form of the Mogollon Rim, which itself was … END_OF_DOCUMENT_TOKEN_TO_BE_REPLACED

By Wayne Ranney Oak Creek Canyon, although not as deeply cut as Grand Canyon, is still a very pleasant place to hike with many trails leaving the canyon floor and accessing the rim on either side … END_OF_DOCUMENT_TOKEN_TO_BE_REPLACED