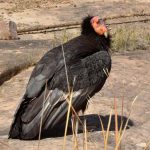 In addition to this, I do have 4 confirmed mortalities to report:

I previously reported the death of female 343 and necropsy results indicated she died of lead poisoning. Also female condor 393, who was hatched in 2005 and released in 2009, is suspected to be dead since her transmitter signal was heard in mortality mode, but her body has not been recovered.

This winter has obviously been bad in regards to condor deaths. A total of 7 condors deaths have been confirmed since early December, including 3 breeding females (133, 210, and 343).

The Peregrine Fund was very busy through the winter, having captured and tested the blood-lead levels for 72 condor of AZ/UT condor population. This year’s trapping results are showing a very high level of lead poisoning. 28 condors were treated for lead poisoning this winter which is up from the previous lead exposure season.

On a more positive note, there is 1 confirmed wild nest and 5 suspected wild nests in the AZ/UT population. Please refer to the condor chart for information on breeding pairs and estimated egg lay dates and locations. Grand Canyon biologists and volunteers have been busy monitoring the activity of 2 nest caves that can be viewed from the South Rim. The nest cave of 234/280 can be viewed from Hopi Point. The exact nest cave of 122/316 is still being determined, but biologists have narrowed down the location to a specific wall off the Tower of Ra formation. This nesting pair a bit harder to monitor since we have to drive west of Hermits Rest and then hike to the rim. With any luck we’ll be monitoring the behaviors of proud parents soon!