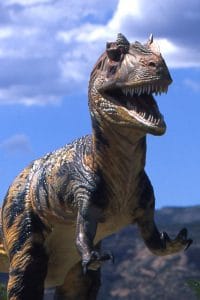 Although rocks of dinosaur age are not present in the Sedona area today, geologists believe that they were once present here. No less than 5,000 feet of this younger strata and perhaps as much as 10,000 feet was once present here before it was eroded away. We cannot know the details of this interval in time (from about 250 million to 80 million years ago) but the geography during this long period of time was subdued and likely received similar-aged deposits that remain north of Flagstaff. In a sense, we all got here too late to see what these colorful strata might have looked like. Nevertheless, they were once here, perhaps rich in dinosaur fossils that are now eroded away forever.

Beginning about 80 million years ago, these deposits were stripped away. Southwestern Arizona experienced an uplift that was similar in many respects to the tectonic setting of western South America today, where the Andes Mountains are being actively uplifted. An ancient range called the Mogollon Highlands was uplifted to the southwest of Sedona at this time and had the effect of raising Sedona’s strata into a position where it could be attacked by erosion. All of the dinosaur-age strata were likely removed in the next few tens of millions of years from the Sedona area and rivers eventually flowed from the mountains in the southwest to the lowlands located to the north. The future area of Sedona was positioned near the southern edge of these lowlands, an area that today is known as the Colorado Plateau. These rivers ran unimpeded to the north, as the Mogollon Rim had not yet formed. These river deposits are known locally as the Rim gravel, because of their position in today’s landscape on top of the Rim. There are no easily seen outcrops of the Rim gravel near Sedona.

Beginning about 30 million years ago, the erosion style began to change from one of lateral stripping of wide belts of sediment, to more vertically directed erosion. It was at this time that the earth’s climate began to cool and become more arid, which may have influenced the erosion style in the Sedona area. We know that the Mogollon Rim appeared on the landscape about this time because river gravels were deposited at its base by about 25 million years ago. The deposit is known as the Beavertail Butte formation (the word ‘formation’ is in small caps because it has not yet been formally described) and is composed of pebbles of rock types exposed only south of Sedona. This means that like the Rim gravel that preceded it, the gravel in the Beavertail Butte formation also came from the south (the Mogollon Highlands) but became deflected to the southeast as they encountered the base of the Mogollon Rim. The Beavertail Butte formation can be observed most readily in road cuts south of the junction of State Highway 179 and the Beaverhead Flat Road, and likely represents the birth of the Verde River – the modern stream also trends in a southeast direction.

By Wayne Ranney Whether they know it or not, the 4.5 million annual visitors to Sedona come here because of the area’s spectacular geology, or to enjoy one of the many trails or cultural amenities … END_OF_DOCUMENT_TOKEN_TO_BE_REPLACED

By Wayne Ranney Before we begin to understand Sedona’s red rocks, let’s have a look at what lies beneath them, the so-called basement or foundation of the Verde Valley. These rocks are hidden from … END_OF_DOCUMENT_TOKEN_TO_BE_REPLACED

By Wayne Ranney The famous red rocks in and around Sedona are, for the most part, the same layers that make up the upper walls of the Grand Canyon. Even the formation names used between the two … END_OF_DOCUMENT_TOKEN_TO_BE_REPLACED

By Wayne Ranney Next is the Hermit Formation (formerly called Hermit Shale), which contains more amounts of mudstone than sandstone and thus weathers into a broad terrace upon which much of the … END_OF_DOCUMENT_TOKEN_TO_BE_REPLACED

By Wayne Ranney Although rocks of dinosaur age are not present in the Sedona area today, geologists believe that they were once present here. No less than 5,000 feet of this younger strata and … END_OF_DOCUMENT_TOKEN_TO_BE_REPLACED

By Wayne Ranney Beginning about 15 million years ago, volcanism returned to the Sedona area in the form of basaltic cinder cones, shield volcano’s and lava flows. Volcanism lasted until about 10 … END_OF_DOCUMENT_TOKEN_TO_BE_REPLACED

By Wayne Ranney If someone were hiking in the Sedona area 10 million years ago, they would see the Sedona red rocks partially exposed in an ancestral form of the Mogollon Rim, which itself was … END_OF_DOCUMENT_TOKEN_TO_BE_REPLACED

By Wayne Ranney Oak Creek Canyon, although not as deeply cut as Grand Canyon, is still a very pleasant place to hike with many trails leaving the canyon floor and accessing the rim on either side … END_OF_DOCUMENT_TOKEN_TO_BE_REPLACED