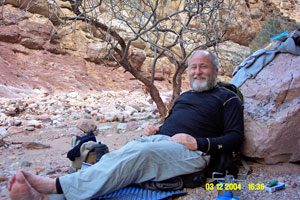 Michael F. Anderson, Ph.D., earned his doctoral degree in history from Northern Arizona University in 1999. He has been a researcher and writer of canyon history since 1990, a teacher and guide for the Grand Canyon Conservancy Field Institute since 1993, and Grand Canyon National Park’s trails archeologist and cultural resource specialist from 2001 to 2007 when he “retired.”

Since retirement, Mike continues to work with Arizona State University and Grand Canyon National Park on certain projects and even teaches classes occasionally. That and reviewing professional papers, there’s no chance Mike’s skills will get rusty anytime soon. So much for retirement!

Mike is the author of three canyon histories, all published by the Grand Canyon Conservancy (formerly Grand Canyon Association): Living at the Edge: Explorers, Exploiters and Settlers of the Grand Canyon Region, 1998; Polishing the Jewel: An Administrative History of Grand Canyon National Park, 2000; and Along the Rim: A Guide to Grand Canyon’s South Rim from Hermits Rest to Desert View.

Mike served as project director for Grand Canyon’s first history symposium in January 2002, and compiled and edited the proceedings for publication by Grand Canyon Conservancy, entitled A Gathering of Grand Canyon Historians, published by GCC in November 2005. His work also includes nominations of Grand Canyon’s trails to the National Register of Historic Places, Historic American Engineering reports of the canyon’s historic roads (available at the Library of Congress), and articles in Grand Canyon Nature Notes and the GCC newsletter, Canyon Views.

When not exploring Grand Canyon’s roads and trails, Mike is often teaching history to park interpreters and other park staff, and NAU and Yavapai College Elderhostel (now Road Scholar) groups. In 2005 the Grand Canyon Historical Society honored him for his contributions to canyon historiography with the society’s pioneer award.

Christa Sadler started playing in the dirt when she was a toddler, much to the dismay of her … END_OF_DOCUMENT_TOKEN_TO_BE_REPLACED

Dr. Tom Myers grew up in Flagstaff, Arizona. His interest and passion for the Grand Canyon began in … END_OF_DOCUMENT_TOKEN_TO_BE_REPLACED

Wayne Ranney is a geologist, trail guide, and author based in Flagstaff, Arizona. He completed his … END_OF_DOCUMENT_TOKEN_TO_BE_REPLACED