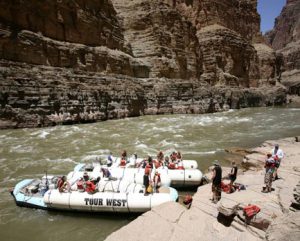 The presence of motorized rafts has long been a polarizing issue among the Grand Canyon river running community. Champions claim that they provide an efficient way to travel through the canyon on a virtually unflippable watercraft that has room for plenty of supplies, especially if you’re on a tight schedule or budget. Detractors claim that their noisy engines are a distraction at best, and a menace at worse, for those trying to enjoy a pristine backcountry experience (whether sporting two legs or four).

A recent ruling by the United States Court of Appeals for the Ninth Circuit has ensured that this raging debate will not ebb any time soon. By upholding a November, 2007 decision by United Stated District Judge David G. Campbell, the appellate court handed the National Park Service a victory over a coalition of wilderness advocacy groups. The coalition brought suit in 2006 contesting, among other things, the provision for continued motorized rafts in the park’s long-anticipated Colorado River Management Plan.

For more information on the controversy follow this link.