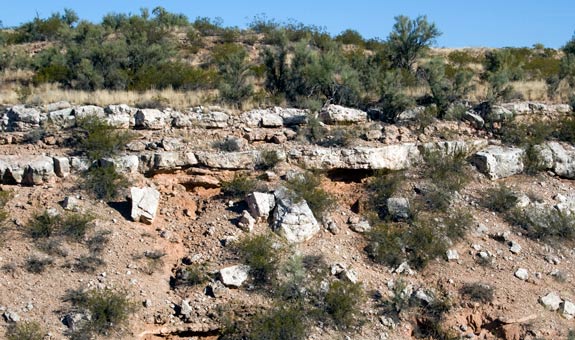 The Verde Formation is variable in outcrop with white limestone ledges representing high stands of the Verde Lake and brown mudstone slopes representing low-stands of the lake that allowed muddy sediment from rivers to cover the limestone. From page 114 of “Sedona Through Time” 2nd ed., 2010 © Wayne Ranney

If someone were hiking in the Sedona area 10 million years ago, they would see the Sedona red rocks partially exposed in an ancestral form of the Mogollon Rim, which itself was partly buried by lava from the House Mountain volcano. This aspect of the past landscape would seem familiar to us modern visitors in the area. However, some things were quite different, as the Black Hills were not yet uplifted above the not-yet-fully-formed Verde Valley. All this changed soon thereafter when the Verde Fault became active and raised the Black Hills. On its northeast side the Mogollon Rim had already defined an early incarnation of the Verde Valley and subsequent uplift of the Black Hills completed its final shape. Faulting also had one other important effect on the landscape – it blocked the free flow of the Verde River such that a large lake began to form on and off the basin floor. The resulting lake deposits are known as the Verde Formation, which makes up the whitish cliffs seen at Montezuma Castle, Montezuma Well and Tuzigoot. 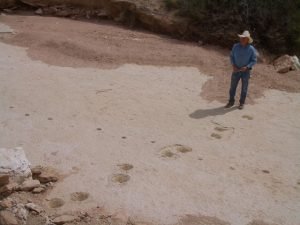 The specific size of the Verde Lake was variable through time on the landscape and it likely was never a deep lake, often becoming shallow or even a dry playa. Changes in climate and precipitation determined whether the lake was expansive or diminished, with high periods of precipitation flooding the lake basin and causing the widespread deposition of white limestone. Dryer episodes would shrink the lake’s outline allowing reddish sediment from the Sedona and Mogollon Rim area’s to inundate and cover the lake bottom in red mudstone. These alternating rock types reflect the changing climates that happened during the lakes existence between about 9 and 3 million years ago.

Some fantastic animals roamed the shores of this ancient lake and their footprints are sometimes fortuitously preserved in the white limestone. Giant Stegomastodon prints, as well as dire wolf and camel are also found. In one instance, the lower jaw of a Stegomastodon complete with 12-foot long tusks was found near the Clarkdale Cement Plant.

Whether they know it or not, the 4.5 million annual visitors to Sedona come here because of the area’s spectacular geology, or to enjoy one of the many trails or cultural amenities within sight of it. … END_OF_DOCUMENT_TOKEN_TO_BE_REPLACED

Before we begin to understand Sedona’s red rocks, let’s have a look at what lies beneath them, the so-called basement or foundation of the Verde Valley. These rocks are hidden from view in the Sedona … END_OF_DOCUMENT_TOKEN_TO_BE_REPLACED

The famous red rocks in and around Sedona are, for the most part, the same layers that make up the upper walls of the Grand Canyon. Even the formation names used between the two areas are similar and … END_OF_DOCUMENT_TOKEN_TO_BE_REPLACED

Next is the Hermit Formation (formerly called Hermit Shale), which contains more amounts of mudstone than sandstone and thus weathers into a broad terrace upon which much of the city of Sedona is … END_OF_DOCUMENT_TOKEN_TO_BE_REPLACED

Although rocks of dinosaur age are not present in the Sedona area today, geologists believe that they were once present here. No less than 5,000 feet of this younger strata and perhaps as much as … END_OF_DOCUMENT_TOKEN_TO_BE_REPLACED

Beginning about 15 million years ago, volcanism returned to the Sedona area in the form of basaltic cinder cones, shield volcano’s and lava flows. Volcanism lasted until about 10 million years ago and … END_OF_DOCUMENT_TOKEN_TO_BE_REPLACED

If someone were hiking in the Sedona area 10 million years ago, they would see the Sedona red rocks partially exposed in an ancestral form of the Mogollon Rim, which itself was partly buried by lava … END_OF_DOCUMENT_TOKEN_TO_BE_REPLACED

Oak Creek Canyon, although not as deeply cut as Grand Canyon, is still a very pleasant place to hike with many trails leaving the canyon floor and accessing the rim on either side of it. One will note … END_OF_DOCUMENT_TOKEN_TO_BE_REPLACED