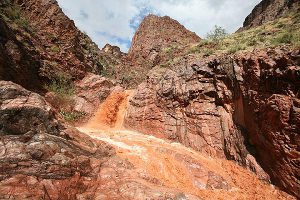 October is historically one of the best months for backpacking at Grand Canyon. The late-summer rains are over, and winter snows lie ahead, leaving crisp, dry days and starry nights for those lucky enough to secure a coveted camping permit. Apparently Mother Nature didn’t get the memo. On October 13th, a rare string of thunderstorms left hundreds of inner canyon travelers scrambling for cover.

I was backpacking rim-to-rim with my wife and friends, and got caught in the thick of it. Two straight days of rain resulted in raging creeks, spontaneous waterfalls, and nerve rattling thunder. At one point we were forced to wait for an hour as a flash flood inundated the North Kaibab Trail with waist high water. Sadly, one woman was swept downstream as she chose to cross a swollen Bright Angel Creek as a workaround. She was fished out of the torrent by fellow hikers relatively unscathed.

For anyone wondering how the canyon got to its present depth in such a dry part of the country, the answer was sloshing around every corner. Soggy duds aside, it was a magnificent experience; one that ended as quickly as it started. We finished our hike a day later under piercing blue skies, and amidst the rising steam from a scrubbed and polished chasm; neither of us worse for the wear.