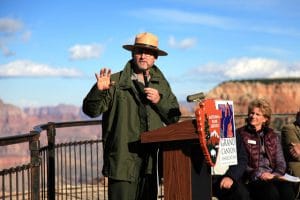 Grand Canyon National Park will bid farewell to Superintendent Steve Martin on January 1, 2011, when he retires from the National Park Service. The University of Arizona graduate began his sprawling thirty-five year career in 1975 as a river ranger at Grand Canyon National Park. He subsequently served in leadership posts in numerous parks, and rose through the ranks of the NPS into the top career position of Deputy Director in Washington, D.C.

Martin’s impressive legacy at Grand Canyon includes overseeing the construction of numerous high profile infrastructure projects including the multi-phase construction that has dramatically changed the visitor experience at the former Canyon View Information Plaza and nearby Mather Point. An avid hiker and river runner, Martin will no doubt continue to be a frequent traveler in the canyon’s backcountry. His replacement will be announced in the coming weeks. Thanks Steve! For more career highlights follow this link.