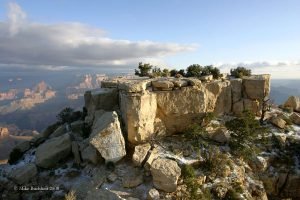 With just a few weeks left in the year, estimates on total visitation to Grand Canyon National Park hover somewhere near 4.3 million. As a local, I have noticed a sharp increase in visitors from overseas (historically 30% of total visitation). This may be attributed to the favorable currency exchange rates for traveling foreigners. I’d prefer to view it as a continuation of a long transition.

The Spanish were the first Europeans to view the Grand Canyon. An expeditionary party led by Garcia Lopez de Cardenas stepped up to the South Rim near modern day Moran Point in 1540 along with their Hopi guides. They were seeking a waterway to the Gulf of California as well as Cibola, the fabled seven cities of gold. According to their journals they were frustrated by the impenetrable obstacle; one that we know today as the Grand Canyon. They left empty handed as it were, presumably tricked by the Hopi guides who knew of many routes into the canyon in the vicinity, but had little interest in sharing them with these suspicious new arrivals.

The spot on the South Rim thought to be visited by Cardenas was Moran Point. This scenic overlook offers one of the more spectacular views of the Canyon. It also has an interpretive panel describing this first encounter by non-Native peoples and the marvel that is Grand Canyon.