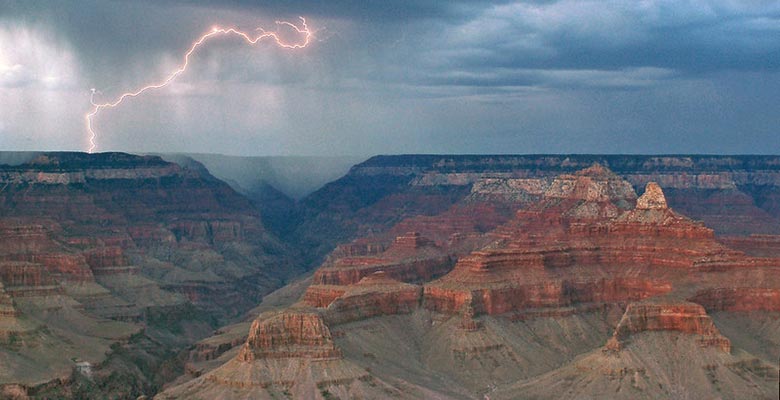 When most people think of Arizona, they think of heat, sand dunes, cactus, and rattlesnakes. Many do not realize that the only place you’ll even find large concentrations of sand dunes in Arizona is near Yuma, right on the Arizona/California border! Even much of Phoenix rises over 1000 feet in elevation.

The South Rim of the Grand Canyon sits at about 7000′ (2135 meters); the North Rim rises up to nearly 9000′ (2745 meters). Remember, Mount Washington in the White Mountains of New Hampshire is only 6288′ (1918 meters) high and notorious for its extreme and unpredictable weather.

Just as the weather differs from the top of the peak down to the cities below, so does it differ in Arizona. I cannot tell you how often we see visitors driving up from Phoenix to the South Rim in November wearing only shorts and t-shirts! I can tell you the local stores that sell jackets and sweatshirts do a booming business!

I’ve experienced snow in June at the South Rim and sixty degrees in the middle of winter. These are the mountains folks! Dress properly. And although I’ve included a table below showing annual average temperatures on the South Rim, weather is unpredictable; it can vary widely from the “average.”

Above is a live image from the webcam located at Kolb Studio on the South Rim of Grand Canyon. Click here to go to the webcam page for more detailed information on the park service site. If the image is black, you’re very likely looking at Grand Canyon at night. It gets dark out here!

Keep in mind that the climate between the rims and the inner canyon differs dramatically with the change in elevation. The South Rim is 4500′ (1372 meters) higher than the Colorado River.

Summer temperatures on the South Rim are relatively pleasant (50°-80° F), but inner canyon temperatures are extreme.

Daytime highs at the river often exceed 100°F. North Rim temperatures are cooler than those on the South Rim due to increased elevation. Afternoon rain showers are common on both rims in the summer.

Summer is also the time that we experience most of our severe weather. Weather and how you deal with it plays a major role in your survival outdoors. Did you know that flash floods are the number one weather related killer in the United States, killing about 150 people per year?

Winter conditions at the South Rim can also be extreme; expect snow, icy roads and trails, and possible road closures. Canyon views may be temporarily obscured during winter storms; in such cases entrance fees are not refundable.

The North Rim is closed in winter (usually first snowfall in November until near Memorial Day).

Spring and fall weather is extremely unpredictable; be prepared for sudden changes in the weather at those times of year. Shown below are “average” temperatures for each month of the year for the South Rim, North Rim, and Phantom Ranch.

Please realize that the following temperatures are taken in the shade in a special ventilated enclosure with a calibrated gauge suspended five feet off the ground. To get an idea of what actual temperatures are in the direct sun, add 20°F/11°C to those listed below.

National Weather Service – An excellent, easy-to-navigate site to find weather information for all of Arizona and the United States.

Flagstaff National Weather Service – For a complete resource and up-to-date information on all of Northern Arizona’s weather, including at the Colorado River near Phantom Ranch, be sure to check out NOAA’s site. For those running the river, NOAA’s site also has river flow (hydrology) information for the entire area.

The U.S. Naval Observatory Astronomical Applications Department has an excellent web site for those wishing to find out sunrise/sunset times and the phases of the moon. To get data for Grand Canyon, simply fill in “Arizona” in the state section and “Grand Canyon” in the city section for whatever date you’re interested in.

This is especially useful if you plan on doing any night hiking using moonlight to avoid the heat of the day, or if you are interested in viewing as many constellations as possible with a new moon. I love to plan my trips so that I will be at a spectacular viewpoint for the sunset and rise of the full moon—someplace like Plateau Point. Awesome!

Trip Planners and Pocket Maps and Service Guides Links will open in a new window. All documents …

No matter what time of year, Grand Canyon can experience smoke or fire of some sort. Whether it is a …

Fishing in the Colorado River requires a current Arizona state fishing license with a Trout Stamp. …

When most people think of Arizona, they think of heat, sand dunes, cactus, and rattlesnakes. Many do …

IMPORTANT: All Havasupai tourism has been suspended for the Campground and the Lodge until further …

If you are interested in mileage to the North Rim, Grand Canyon National Park has driving distances …

Grand Canyon National Park offers ranger programs throughout the park. Whether you are visiting the …

Below are the Indian Reservations found in the immediate Grand Canyon region. Please note that it is …