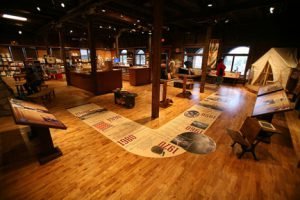 The NPS will use its new facility to provide visitor information by way of interpretive rangers and the wide use of exhibitory. The retail outlet will be operated by Grand Canyon Association, a non-profit park partner that has been assisting Grand Canyon National Park in the areas of education and scientific research since 1932.