While we celebrate the centennial year of Grand Canyon becoming a national park, I’d like to also remind everyone that it is the 150th anniversary of Mary Colter’s birth. Who is Mary Colter you ask?

Those who have visited Grand Canyon’s South Rim or hiked to Phantom Ranch will recognize her work, even if they’ve never heard her name before. Mary Colter was the architect of some of Grand Canyon’s most iconic, interesting and beautiful buildings.

Working for the Fred Harvey Company, Ms. Colter’s first project at Grand Canyon was the Hopi House in 1905. Imagine that! A woman architect in the Wild West designing a fascinating structure styled after ancient Hopi Indian dwellings found in northern Arizona.

The Hopi House would be the first of six major buildings she designed for the Fred Harvey Company at Grand Canyon, all of which are still standing within the park.

Ms. Colter’s designs would have a major impact not only Grand Canyon’s designs but on architecture within western national parks. The National Park Service was very pleased with her organic designs and how well they fit within their natural settings.

Mary Colter was a fascinating woman! She was an amazing and meticulous interior designer as well as an architect. I cannot do her justice in this short post, but if you are at all interested in human history, design or architecture, I highly recommend you head to your library or follow the resources below to find out more. 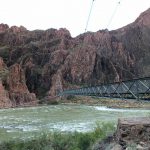