I was graciously invited to join a party of three other women (Autumn, Annette, and Gretchen) on their five day, four night hike from Hermit Trail to Bright Angel starting on September 14th. The itinerary was one I consider ideal: one night at Hermit Creek, two at Monument Creek, and the final night at Horn Creek with hiking out on the 18th.

I wanted to get an earlier start than the others, so I was alone on the first part of the trek which allowed me to drink in the views and solitude on the hike in. I was pleased to see that the infamous rockslide has been completely turned into a very nice trail. No one paying any attention should have problems finding their way now. There were trail working tools along the way, so it is obvious that the park has been working on the trail. Nice job!

I arrived into camp early and had the place to myself. Since it was pretty warm and I’d been up since 3:00 AM, I took a nap in the shade while awaiting my campmates. They arrived a couple hours later and we set up camp. After discussions about how tough the Hermit Trail really is, especially in the heat, we all agreed that early starts to hiking days would be a very good idea.

We got to Monument the next day comfortable in the knowledge that we would be there for two nights. The campsites at Monument are shady and comfortable, and the smooth granite and schist drainage is a lovely place to explore and laze around in. After the wonderful monsoon season, the water was flowing beautifully. While at Monument, Autumn and I managed to explore both up canyon and down to the Colorado River and Granite Rapids.

We set off to Horn Creek on our fourth day at the first sign of light in an attempt to stay ahead of the heat. It was going to be a long day across the sun-drenched Tonto, and we would have to be carrying enough water to get us through dry camping that night at Horn Creek. Horn Creek does have water, but it is radioactive due to the uranium tailings left over from the Lost Orphan Mine which halted mining operations in 1969. Those who haven’t been on the route for a while will notice that the headframe is noticeably missing from view along the rim. It is now completely removed.

We made it to Horn Creek shortly after noon and found a raven greeting us. Someone had left a couple Mountain House meals out to be torn and scattered by the bird as well as a 2-quart enamel percolator coffee pot and a Coleman backpacking stove and fuel. Earlier that day on the trail, we found a Coleman sleeping bag—not the backpacking kind but the ones you take truck camping. It was heavy and obviously pretty new. I have a feeling it was brought down—and left—by the same clueless soul. We cleaned up the food and buried it and carried out the trash, but our packs were already so heavy, we could not justify carrying out the rest of the gear. (We did tell Ranger Silas about it on our hike out.)

Throughout the trip, we had only seen a few hearty souls; some as they hiked out the Hermit while we hiked in and a few in camp. But other than that, we had the Canyon to ourselves. It was pure heaven—that is until we hit Indian Garden! Wow! All of a sudden it was like being dropped into Grand Central Station. Even though it was a Tuesday—and after Labor Day to boot—the crowds were incredible! After more than four days of peace and solitude, the culture shock was jarring.

However, having gotten another early start, we made it to the Bright Angel Trailhead feeling fine. Everyone had to get going shortly upon arriving on the rim, but I’d like to thank my hiking partners for allowing me to join them on this marvelous hike! 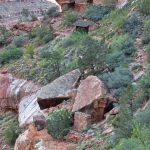 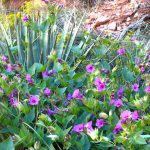 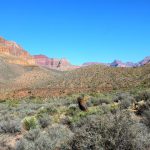 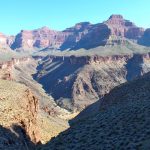 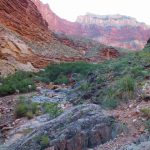 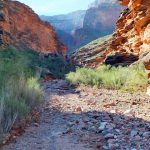 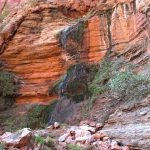 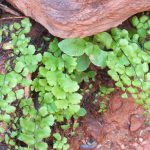 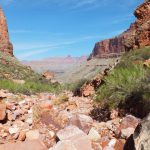 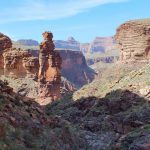 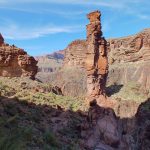 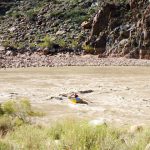 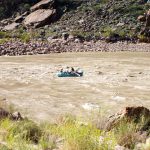 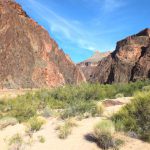 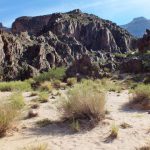 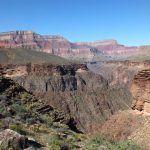 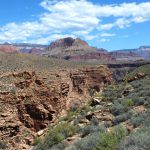 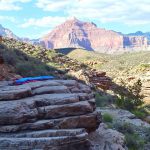 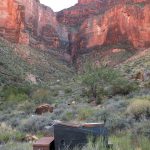 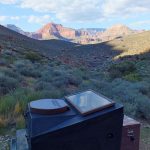 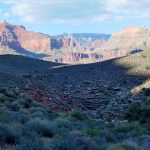 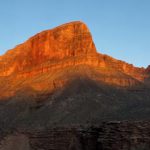 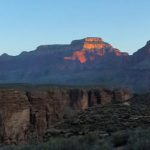 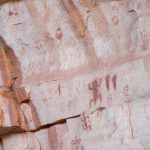