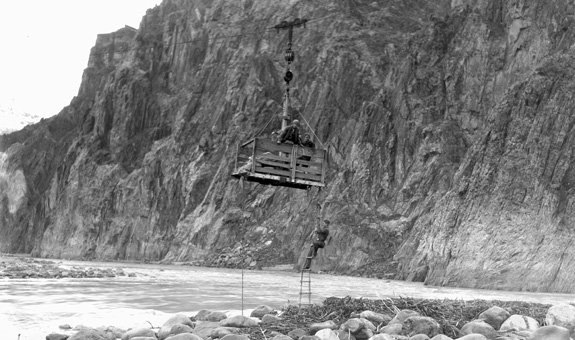 The Civilian Conservation Corps or CCC (1933-1942) was a federally funded Great Depression program to bring “together two wasted resources, the young men and the land, in an attempt to save them both.” Young men, ages 17 to 24, unemployed and almost always from families on welfare signed up for six months stints at national parks, national forest, state parks and other public lands across the nation.  Although each CCC enrollee was paid $30 per month he was required to contribute $25 to his family. (Since his accommodations, medical care, food and clothing were supplied this was not a problem.) At Grand Canyon seven companies (averaging 200 men) worked at the North Rim, Phantom Ranch, the South Rim and Desert View.

At Phantom Ranch during three winters the CCC enrollees built the swimming pool (now filled in), the River Resthouse and the present day Bright Angel Campground. Their trail work included the Colorado River Trail, the Clear Creek Trail and the Ribbons Falls Trail. They, along with South Rim and North Rim companies, built the first reliable rim to rim phone line. While much of the CCC work such as trail construction was inherently dangerous no CCC enrollees lost their lives at work. Companies working at Phantom Ranch frequently worked the summer months on the North Rim.

Desert View (as well as Pasture Wash) got its first reliable telephone line by the CCC.  At Desert View the CCC enrollee work included:  building the campground and remodeling Tusayan Museum; they maintained the road to Cedar Mountain; they built trails and fences; landscaped the East Rim Drive; helped with rescues; built a stone restroom building near the Watchtower; and built a stone wall at Desert View Point.

From 1933 to 1943 the Grand Canyon was a place of furious activity. The CCC, along with other New Deal programs including the CWA, PWA and WPA,was responsible for unprecedented infrastructure improvements throughout the park. One estimate is that fifty years work was accomplished in a little more than nine years. Nationwide over three million young men were CCC enrollees. Many learned valuable job skills and life lessons. Often they went on to serve honorably in World War II. Tens of thousands of poor families were fed and clothed by the enrollee $25 monthly stipend.

By Bob Audretsch Phantom Ranch is located at the bottom of Grand Canyon National Park, Arizona, near the junction of Bright Angel Creek and the … END_OF_DOCUMENT_TOKEN_TO_BE_REPLACED

By Mike Anderson Today, Phantom Ranch and adjacent Bright Angel Campground are much-appreciated havens to canyon hikers and river rafters. But this … END_OF_DOCUMENT_TOKEN_TO_BE_REPLACED

By Mike Anderson Tourism operators believed in simplicity at the turn of the century, and at any rate, did not have the money to invest in … END_OF_DOCUMENT_TOKEN_TO_BE_REPLACED