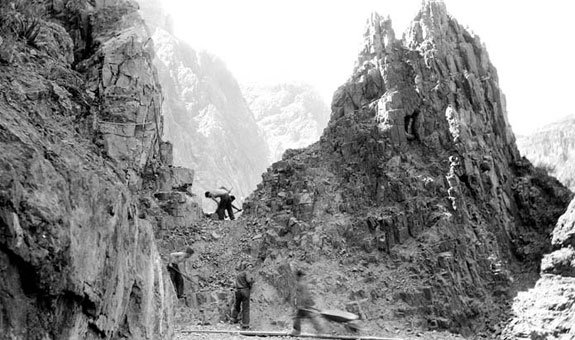 Tourism operators believed in simplicity at the turn of the century, and at any rate, did not have the money to invest in permanent structures to accommodate only a hundred or less annual visitors.

This mindset changed abruptly within a few years of the park service’s arrival at Grand Canyon National Park (created in February 1919). New administrators realized the importance of the central trail corridor to park visitation, and in 1921 spent what little funds they had on a suspension bridge to replace Rust’s cable for better access. The bridge proved almost as much fun as the cable car, however, since both had a tendency to flip over in a strong breeze! The park corrected that problem in 1928 when they replaced the wobbly structure with today’s steel Kaibab Suspension Bridge (the “black bridge”).

In 1922 the Santa Fe Railroad, which had developed Grand Canyon Village, hired Mary Colter to design a resort complex at the site of Dave Rust’s old camp. Colter, one of the nation’s first woman architects—and a fine one at that—settled on a low-key, rustic complex consisting of a dining hall flanked by a manager’s cabin and ten or so guest cabins, completed in 1922. By 1930 the railroad had expanded the dining hall and added cabins for mule guides, an employee bunkhouse, more guest cabins, a shower house, and “dude” corral. Even before the buildings were finished, the park service and Fred Harvey Company (the railroad’s concession partner) advertised Phantom Ranch as a bucolic resort beside a sparking stream in a very remote place—a description that still applies 80 years later!

From 1933 until 1936, Company 818 of the Civilian Conservation Corps (CCC) made its winter camp beside Bright Angel Creek, just a couple hundred yards downstream. Recruits left their cots and grabbed their socks each winter morning to further enhance the Phantom Ranch area. They built today’s Clear Creek and River Trails, maintained the North Kaibab Trail (Rust’s path, which the NPS reconstructed and renamed in 1921-28) and lower South Kaibab Trail (built by the NPS in 1925). They excavated a crowd-pleasing swimming pool at Phantom Ranch that drew guests like a magnet during summer months until closed by county health officials in the 1970s.

Phantom Ranch remained a quiet retreat for at most thirty people per day until the mid-1960s. Glen Canyon Dam, completed in 1963, transformed the Colorado River through Grand Canyon and encouraged full-season commercial rafting. By the early 1970s, more than 15,000 people rafted the river each year, and almost every one of them visited Phantom Ranch to eat, drink, rest, and recreate before moving on down river. Backpackers appeared in these same years and crowded the abandoned CCC camp that would soon be named Bright Angel Campground.

Visitation pressure by the mid-1970s caused the NPS and Fred Harvey Company to consider abandoning Phantom Ranch and returning it to a natural condition. Fred Harvey officials, who found it too onerous to supply by mule, thought about turning the site over to the park service to operate as a backcountry hostel. NPS administrators instead allowed Fred Harvey to raise the price of meals, curios, lodging, and mule trips—the magical cure to many a problem!

Today, in summer, the area downstream of Phantom Ranch bustles with waterlogged river rafters, plodding backpackers, exhausted campers, butt-sore mule riders, and harried NPS rangers. But most of these drop by the wayside by the time Phantom Ranch is reached. It is still a lovely, haunting place, if not quite as lonely and remote as in Dave Rust’s time. Best kept secret? It is a cooler, less-hurried PARADISE in winter!

By Bob Audretsch Phantom Ranch is located at the bottom of Grand Canyon National Park, Arizona, near the junction of Bright Angel Creek and the … END_OF_DOCUMENT_TOKEN_TO_BE_REPLACED

By Mike Anderson Today, Phantom Ranch and adjacent Bright Angel Campground are much-appreciated havens to canyon hikers and river rafters. But this … END_OF_DOCUMENT_TOKEN_TO_BE_REPLACED

By Mike Anderson Tourism operators believed in simplicity at the turn of the century, and at any rate, did not have the money to invest in … END_OF_DOCUMENT_TOKEN_TO_BE_REPLACED