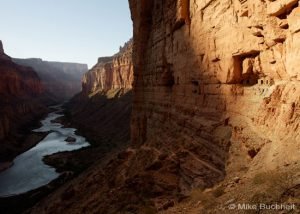 Until their puzzling exodus in the late 1200s, the Anasazi people carved out a hardscrabble existence from rim to river in the Grand Canyon. Wherever there were reliable springs or fertile land for farming, it’s a safe bet that these hardy inhabitants took full advantage at some point during their centuries-long presence. With the help of artifacts and masonry archaeologists have documented one of the greatest densities of Anasazi in an amazing corner of Marble Canyon called Nankoweap.

The Nankoweap Trail tumbles eleven miles off the North Rim before arriving at Nankoweap Delta along the Colorado River. I’ve been there a handful of times as a river runner, and once as a backpacker, and it continues to be one of the places in the canyon I feel most at home. Of particular interest in this sheer-walled oasis are the famed Anasazi granaries high in the cliffs. The remains of these stone and mortar food storage bins are accessed by a precipitous trail.

This photograph was taken at daybreak after watching the sun creep down the limestone façade to the exact point where the granaries were illuminated. It’s a sunrise I will always hold dear, and marked the beginning of another glorious day rafting on the Colorado River. This image is available as a matted print on my website.