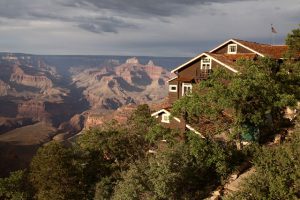 On January 11, 1908, President Theodore Roosevelt took the bold step of invoking the Antiquities Act to extend additional federal protection to large areas of the existing Grand Canyon Forest Reserve. The newly-minted Grand Canyon National Monument was created to preserve the scientific integrity of the largest eroded canyon in the country. At the ceremony, Roosevelt himself famously described the Grand Canyon as “…the one great sight that every American should see.” Roosevelt’s gesture would pave the way for the designation of Grand Canyon National Park by President Woodrow Wilson in 1917.

The National Park Service marked the 100th anniversary of Roosevelt’s proclamation with a celebration in Grand Canyon Village on the South Rim. Events included special interpretive programs (given by ranger’s donning vintage uniforms), and by waiving the park entrance fee for visitors. There was even a birthday cake for attendees at the Canyon View Information Plaza.