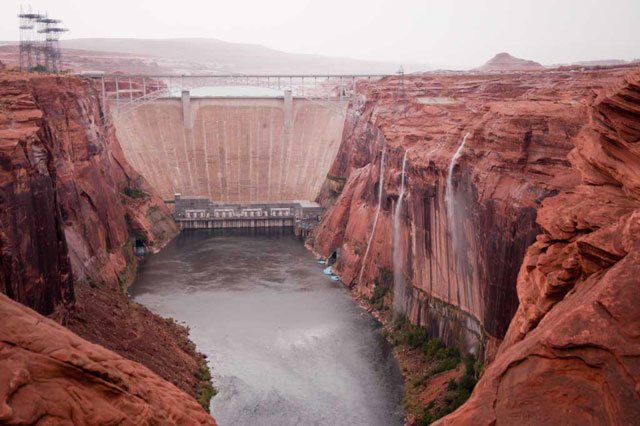 Like all lakes, both natural and man-made, Lake Powell will eventually fall victim to sedimentation. The detritus, brought into the lake by the Colorado River and its tributaries, will gradually push the lake out of each of the lake’s side canyons until the silt beds coalesce into a continuous sandy sheet on the main channel reaching downstream all the way to the dam.

Of course, the Colorado River is an exceptionally muddy river so, even though Lake Powell possesses a full volume of eight cubic miles of water, even which huge capacity will choke with silt in an estimated 700 years. If Glen Canyon Dam survives for 700 years (which is likely if the dam is properly maintained for those seven centuries), the former lake location will continue receiving silt that will accumulate above where the lake surface once lay. Because of this, the volume of the eventual dirt “lake” will occupy up about 50% more volume than the water lake because 50% of the volume will accumulate above the old lake surface, a thin wedge at the dam but thickening continuously upstream well beyond the former head of Lake Powell. Thus the long term outlook for Lake Powell is not pretty. On the other hand, such is the fate of all lakes. All are doomed

This look into the future of Lake Powell is reasonable. But it isn’t necessarily completely inevitable. Unforeseen events could easily derail any reasonable forecast. Complicating factors could include climate change, volcanic activity upstream of the lake, failure to maintain the dam, excessive human water diversion projects and…almost anything that could change the rate of river flow and river turbidity. A lot can happen in 700 years. How accurate would prognostications by the Ancestral Puebloan Indians have been if they had tried to imagine what the future would hold for their small water diversion projects 700 years into the future, into our time? No one then could have possibly come close to imagining today’s canyon country population, technology and potential for both great human progress and monstrous miscalculations.

Glen Canyon (along with Lake Powell) and Grand Canyon are both incredibly beautiful and dynamic. The uplift that both regions have experienced in the last 70 million years has initiated a mode of fast sculpting of the old rock layers, sculpting that creates canyons, cliffs, mesas, balanced rocks and many of the unusual landforms that inhabit the landscape.

What we see at Grand Canyon or Glen Canyon during the vast majority of our visits are geologic “Rest Days” when the canyons are silent and unchanging. But don’t let these rest days fool you. “Work Days” also sometimes occur when rocks come crashing down, slot canyons are gouged deeper and the landscape begins to migrate towards the sea and low lying regions particle by particle and stone by stone. Work Days are often made manifest on bad weather (heavy rains, freezing temperatures, high winds) when it is best for we fragile and short-lived humans to watch out, get out of the way, and stay at home planning the next trip.

Take care out there amid the rocks and canyons!

An extraordinarily beautiful river canyon lay where today’s Lake Powell shimmers. There was nothing else like it on earth with its isolation, twisting and mysterious side canyons, Indian ruins and … END_OF_DOCUMENT_TOKEN_TO_BE_REPLACED

Glen Canyon area rocks were laid down during the Mesozoic Era, a period of time that followed the interval when all Grand Canyon rock units were created. The Mesozoic Era lasted about 170 million … END_OF_DOCUMENT_TOKEN_TO_BE_REPLACED

The Colorado Plateau is characterized by a thick sequence of mostly sedimentary rock layers that have been uplifted thousands of feet by plate tectonics movements. The uplift began about 70 million … END_OF_DOCUMENT_TOKEN_TO_BE_REPLACED

Throughout the middle and downstream sections of Lake Powell about a dozen rock units can be seen. All are sedimentary in origin. Of these, only about four are exceptionally prominent, and three of … END_OF_DOCUMENT_TOKEN_TO_BE_REPLACED

Glen Canyon hosts a wonderful array of interesting landforms. They include the following: Alcoves are large hollows in the sandstone cliffs. Native Americans utilized many of the deepest for … END_OF_DOCUMENT_TOKEN_TO_BE_REPLACED

The mountains that stand near Glen Canyon are quite unusual. They are known as laccolithic mountains formed where plumes of magma have made their way toward the surface only to run out of pressure … END_OF_DOCUMENT_TOKEN_TO_BE_REPLACED

Like all lakes, both natural and man-made, Lake Powell will eventually fall victim to sedimentation. The detritus, brought into the lake by the Colorado River and its tributaries, will gradually push … END_OF_DOCUMENT_TOKEN_TO_BE_REPLACED