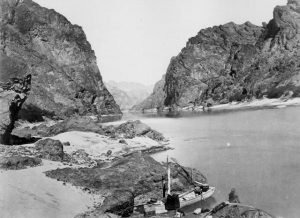 European immigrants were a major force in the 19th century exploration of the Grand Canyon. Civil War photographer Timothy O’Sullivan, a native of Ireland, was the first to photograph the Grand Canyon. Equipped with one ton of clumsy gear, O’Sullivan made over 300 negatives during an 1871 survey of the lower Grand Canyon led by Lieutenant George M. Wheeler. Though many of the negatives were damaged or destroyed en route to Washington, D.C., those that survived were noted for their artistic flair as well as their scientific accuracy.

O’Sullivan was one of the first to capture images of the American Southwest, including Native American villages and now famous archaeological sites. His work was unusual for the time in that it often focused on raw, undeveloped landscapes rather than industrialized settings. He died in Staten Island of tuberculosis at the age of 42, not long after becoming the first official photographer for the United States Geological Society.