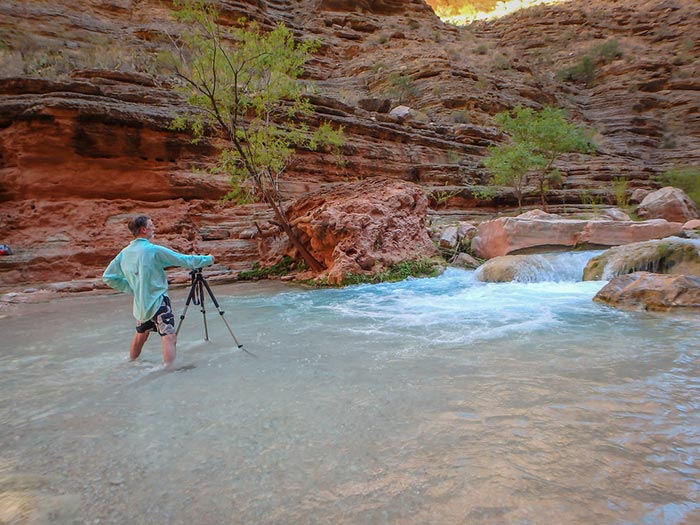 Since 2005, Mike Buchheit has been writing an article for Hit the Trail twice a month. So when Mike told me that he and his wife, Kim, were going to be taking a vacation to Italy to celebrate their 25th anniversary and asked if I could cover the article this week, obviously I said “yes!” I decided to take this chance to devote a bit of this space to give my thanks for everything Mike has done—for this site as well as in support of the park.

Kim, Mike’s wife was working graphics in the publications department at the GCA, and they had moved to the Canyon the spring before. In fact, I met Kim before meeting Mike. Most of the Field Institute catalogs my classes were featured in had Kim’s hand in them, as did the publications and many of the beautiful GCA publications printed at that time. She is still very active with the park in many graphic projects as well as her own business.

Mike became the Director of the Field Institute by the fall of 1997, and I had the privilege to work with him steadily as a field instructor until 2005. My husband is a superintendent in the National Park system, and we’ve moved around a bit, so my guiding days are far and few these days.

I have worked with the newly formed Petrified Forest Field Institute (PFFI), and Mike was heavily instrumental in helping that get off the ground by providing his know-how and expertise in its formation. We don’t get many opportunities to get together as often as we might like, but my professional collaboration and friendship with Mike has only grown stronger over the years.

Mike’s duties have expanded. While he is still the Director of the newly renamed Grand Canyon Association Field Institute (GCAFI), he also does fundraising for Grand Canyon through the GCA in his role as Major Gifts Officer. GCAFI is a world-class program that averages 60 multi-day classes and 300 rim-based day tours, and under Mike’s leadership, they run like a well-oiled machine.

Besides his incredibly full plate of work, Mike manages to get out in the most amazing weather and/or most challenging times and captures magical images of this special place we know as Grand Canyon. He not only shares these images on Hit the Trail, but Mike’s work has been shown in several galleries in Arizona—the last one being the Tilt Gallery in Scottsdale. His work is also available in more than a dozen stores throughout Grand Canyon National Park. And last, but certainly not least, you can visit his own Grand Canyon Prints site for viewing and purchasing his work in a multitude of formats.

So, to end this, I just want to give my most sincere THANKS to Mike for all his years of beauty and wisdom on these pages. The YouTube video below is a slideshow of images that have appeared on Hit the Trail over the years. Most are of Grand Canyon; you’ll see a few of Yosemite, Yellowstone and other special places sprinkled in. Enjoy!