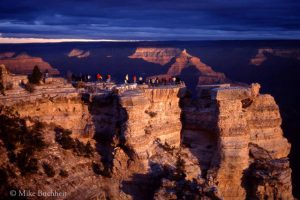 2014 marks the 50th anniversary of the Wilderness Act, one of the three major pieces of legislation that were passed in defense of public lands; the others being the National Park Service Organic Act (1916) and the formation of the Environmental Protection Agency (1969). Signed into law by President Lyndon B. Johnson, the Wilderness Act set aside 9.1 million acres of public land for protection. Through the hard work and persistence of visionaries, legislators, and citizen activists, this number has swelled to 106 million acres.

Readers of this column will find it interesting that Grand Canyon National Park has yet to receive wilderness designation, despite the National Park Service recommending such action as far back as 1980. Though the 1.1 million acres of the park that are proposed for immediate wilderness designation will continue to be managed as such until a final decision is made by Congress.

Despite the delay in designation for Grand Canyon, we can all be thankful that we live in a country with mechanisms in place for protecting our natural and cultural heritage—and the Wilderness Act is one that has proven itself invaluable in this regard. Follow these links for more information: